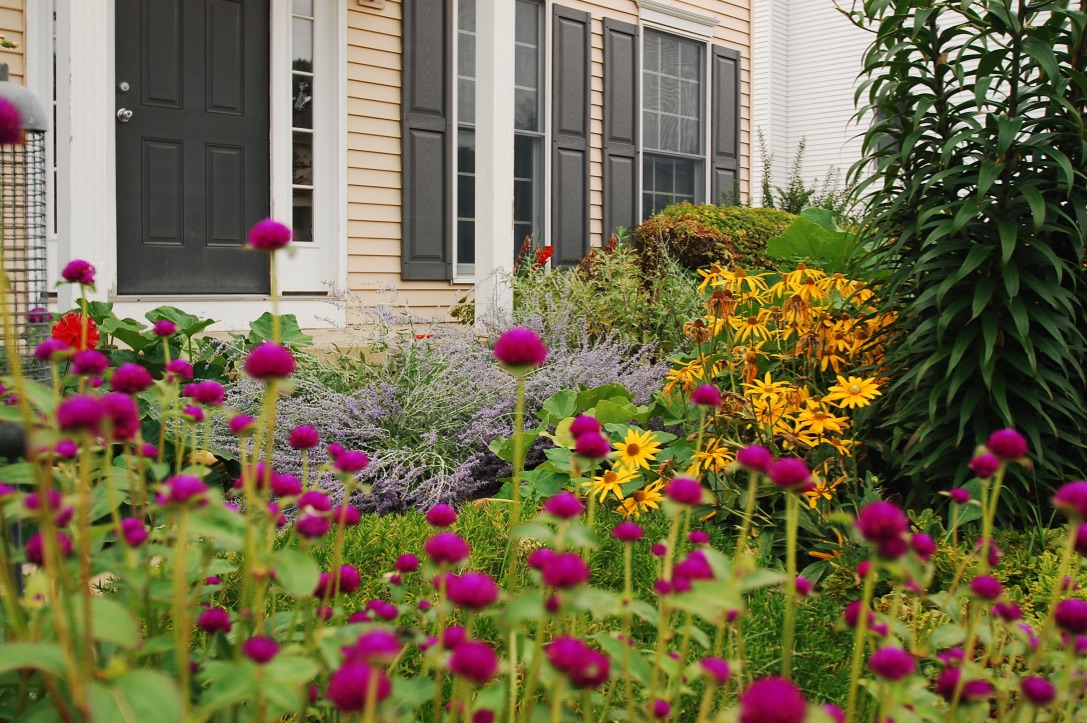 As you are about to see, late August/September is all about cutting back.

1. Remove Dead Flower Stalks from Perennials As Daylilies and Irises begin to die back, you can yank out the brown flower stalks, just give them a tug and they should pop right out.

2.  Daylilies and Irises:  Remove dead and dying leaves with brown tips.  With both, you can just grab the leaves at the base of the plant and give a downward and outward tug, and they will come right off.  If it’s the end of August, and you can’t stand the way they look anymore, you can remove all or most of the leaves, as these plants are beginning their dormancy anyway.  I just removed all the leaves from some of my day lilies 2 weeks ago, Aug 18, and they are starting to get a few new leaves, and looking much happier.

3.  Deadhead, Deadhead, Deadhead:  Deadheading is the term used for removing spent flowers from your plants.  If you have not been doing it all summer, it’s not too late to start.  Just cut off the spent flowers just above a set of leaves, or down to a set of leaves where it will make the plant have a nice shape.  Why deadhead?  This will cause the plant to spend less energy making seeds, and more energy on producing more flowers.  We could always use more flowers, right?

4. Peonies:  If your peony bushes are covered with white powdery mildew, now would be an okay time to cut all the leaves off to the ground.  I do this every year, and my peony bush thrives every season.  Spare yourself from having to look at those icky leaves and just cut them down, right at ground level.

5.  Hydrangeas:  You can begin pruning back the blooms as they die back, or thin them out so that they don’t sag so much after a rain.  My Limelight Hydrangea was so top heavy with blooms, that the last time it rained, it looked like someone had jumped the fence and landed right on top of the bush!  After they dried off, I thinned out the largest blooms, and the whole bush, sprung back up, as if saying “Thanks, momma, my branches were getting so tired.”  If you like to dry your Hydrangeas, wait until the florets begin to feel papery, and then cut them, and place the stems in buckets of water in your garage until they are completely dry.  They make lovely wreaths and floral arrangements.  If you are wanting to reshape your Hydrangea bushes, now is the time to do it, after they bloom.  Pruning it in the spring will result in no flowers the next summer.

6.  Asiatic and Oriental Lilies:  If you haven’t already done so, you can cut back the stems to about 1/2 or 1/3 their original height to remove the seed heads where the flowers once were.  As the stalks begin to brown all the way down…later in September, you can cut them back.

7.  Purple Coneflowers:  Remove the spent flower stalks, if you don’t like the looks of them.  You might get a few more blooms, but at a much slower rate of growth as the season is winding down.  If you don’t mind the looks of the seed heads, leave them on, as Goldfinches love to snack on them.  Also, they will reseed and your coneflower patch will expand for next season.

8.  Hostas:  Remove leaves as they turn brown or start to look bad, and cut spent flower stalks down to the base of the plant.

9.  Are you beginning to see a pattern here?  This time of year is all about thinning out and cutting back whatever is driving you insane because it’s so over grown.  Grab those pruners and a bucket, put a tarp in the bed of your pickup, and start filling it up with everything that is beginning to make you want to pull out your own hair.  Just remember, your garden might look a little “shocked” at first when you step back to take a look.  Don’t worry, garden pruning is just like haircuts for plants.  As my father-in-law always says, “The difference between a good one and a bad one is about 2 weeks.”  It will be fine, and you will feel  much more under control…..and maybe a bit sweaty.