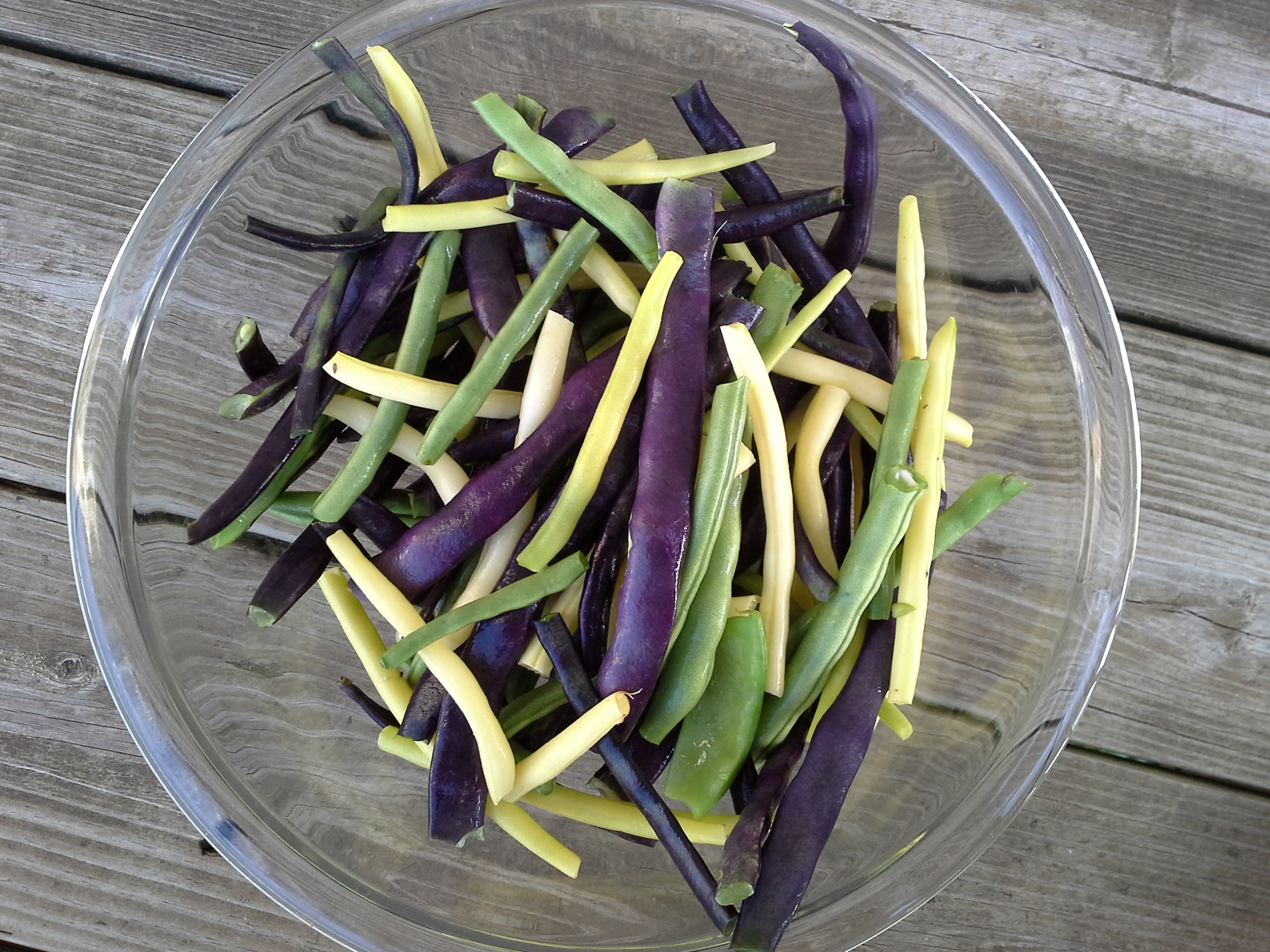 This is my hill, pile? Whatever the saying is, this is my hill of beans. Washed, ends snapped, and ready to grill.

Place in a bowl and pour about 1/4 cup of olive oil on them. Toss until completely coated. DO NOT SEASON YET!

This is what they look like after being tossed in olive oil. Shiny!

Dump the loot into your grill basket, and spread out evenly.

Place on top rack of the grill, and heat for 15 minutes, tossing every 5 minutes. You might want to cook them a little longer to your desired level of crispness. When done, return them to the bowl, sprinkle on some Kosher salt, and toss, eat, and enjoy.

“Beans don’t fry in the kitchen.  Beans don’t burn on the grill.  Took me a whole lot of tryin’, just to get up that hill.”  Sometimes, that’s how gardening feels, doesn’t it?  But then, when you get a crop, it’s soooo rewarding, even if it’s a small one, it still feels like a victory…..like you’re finally “In the big leagues”, and you’re finally, “Movin on up!”  I love that song, and as I have been writing this post, it keeps popping into my head, so I thought I’d share it so you can listen to it while you read:)   My two year old and I have been dancing and clapping along to the music this morning.

This spring I planted beans.  A LOT of beans.  I had high hopes of sampling new varieties of Limas, black beans, Garbanzo Beans, Yin Yang beans, Fava, purple pole, green pole, yellow wax, and I think that’s it.  Everything was going great, until this drought came along, and nothing was happening.  I had almost given up on my crop, and thought all the hundreds of seeds I planted were only going to amount to about a handful for the entire crop!

The beans proved me wrong, and have been beating the odds that were stacked against them.  I can’t remember the last time it rained, but the beans are giving me a decent crop, with even a few to share!

With this recent heat wave, it’s been too hot to cook in the kitchen, so I decided to try grilling the beans.  They tasted deeelish!  Almost like a healthy french fry with an extra crunch, these babies were super easy to prepare, and the results were more than worth the effort.

The only thing I would change about this recipe, if I could, would be to make it so the beans hold their color better.  They don’t look nearly as colorful as they do raw, which could be a turn off to if you didn’t already know how delicious they taste.